*First Wednesday of each month 1pm - 5pm only

We will do our best to accommodate your busy schedule. Schedule an appointment today!

Please complete this form to request an appointment. Please note that you do not have an appointment until you receive confirmation from us. Thank you! 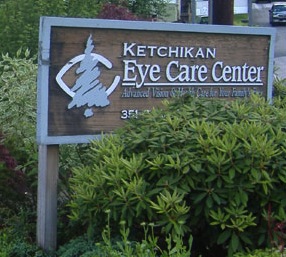 Rick D. Swearingen, O.D.
Born in Jamestown, North Dakota on December 22, 1951, his family moved to Sitka, Alaska in 1953 and then to Juneau, Alaska in 1959. He graduated from Juneau-Douglas High School in 1970. Dr. Swearingen then attended Pacific University in Forest Grove, Oregon from 1970 to 1976. He received his Bachelor of Science degree in 1974 and his Doctor of Optometry degree from Pacific University College of Optometry in 1976. He began practice in Ketchikan with E.E. Smith, O.D. at the Ketchikan Vision Clinic in September of 1976. He purchased the Ketchikan Vision Clinic from E.E. Smith, O.D. in January 1985. Became partners with Dr. Christianson in 1997 and they combined their clinics into Ketchikan Eye Care.

Erik D. Christianson, O.D.
Born in Missoula, Montana on December 4, 1959, he was raised in western Montana and graduated from high school in the town of Dillon in southwest Montana. He completed undergraduate studies at Montana State University and Concordia College in Minnesota. He received his Doctor of Optometry degree from Pacific University College of Optometry in 1986 and practiced in Eagle River, Alaska as an associate with Eagle River Vision Center in 1986-87 and in Barrow, Alaska from 1987-90. He purchased the practice of E.L. Craig, O.D. and moved to Ketchikan in 1990. He named his Ketchikan practice Alpine Vision Center and operated on Main Street in the old Catholic Church complex from 1990-1997. In 1997 he became partners with Dr. Swearingen and their joint efforts became Ketchikan Eye Care Center.

Marilyn K. Holm, O.D.
Born in Broken Bow, Nebraska on January 12, 1962, she was raised on a farm in Mason City, Nebraska with her 5 siblings. She graduated from high school in Loup City, Nebraska in 1980 and attended Ottawa University in Kansas. She worked as a medical technologist for 13 years before returning to optometry school. She received her Doctor of Optometry degree from Indiana University School of Optometry in Bloomington, Indiana in 1999. Dr. Holm practiced in Kansas from 1999-2012. In December 2012, she joined Alaska Eye Care Centers in Wasilla and Anchorage, Alaska. In 2014, she opened her own practice inside Vista Optical in Soldotna. From 2018-2019, Dr. Holm worked with Prism Optical, providing vision services to several villages in Alaska. She joined Ketchikan Eye Care Center in July 2019. Her full scope of experience is a valuable addition to our busy practice and enables us to better care for our patients.

The roots of KECC go back to one of the earliest eye care practices in Alaska. KECC as it is currently known, came from a merger in 1997 to two established Ketchikan optometry practices into one practice. These two separate practices were Alpine Vision Center/Erik D. Christianson, O.D. and Ketchikan Vision Clinic/Rick D. Swearingen, O.D.

Prior to the merger in 1997, Erik D. Christianson, O.D. practiced at 348 Main Street and purchased this practice from the estate of the late Ed Craig, O.D. in 1990. Dr. Craig practiced optometry in Ketchikan since the mid 1950’s and had purchased the practice of Charles Martin Carlson, O.D. Dr. Carlson was one of the first optometry license holders in Alaska and practiced in Ketchikan in the 1930’s and 40’s.

CHANGING DEMOGRAPHICS AND COMPETITION DRIVE THE CREATION OF KECC

During their many years in solo practice, doctors Ed Craig and E.E. Smith were competitors. At the same time, Ketchikan was in the heyday of the logging and fishing industries. These two strong, resource-based industries combined with a solid nucleus of government jobs providing a strong, stable economy in Ketchikan, solo was the norm throughout the country in the eye care industry. Two strong, solo practices provided a nice choice for Ketchikan patients and the collegial professional competition between the doctors assured quality care.

The late 80’s and the early 90’s was a period of rapid technological changes in the eye care field. Due to advances in micro-circuitry and computerization, specialized equipment was being developed to measure and monitor changes to eye health. Optometry doctors were expanding their treatment privileges from glasses to glasses and contact lenses, and finally to glasses, contact lenses, and treatment of eye diseases. This necessitated the need to use more monetary resources on the purchase of equipment. More space was necessary to use the equipment properly. At the same time, commercial eye care was becoming popular in the lower 48 and the amount of money being paid for eye exams was shrinking. Contact lenses that fetched $300-$600 per patient were now only worth $100-$400. Making a living and keeping up with technology became increasingly difficult for solo practitioners.

Downtown Ketchikan was also changing. Downtown was changing from a center for services to a center for tourists. Parking and traffic congestion were a real problem. The Ketchikan economy was also changing. Due to outside pressures, the logging and fishing industries were becoming unstable. Competition from a commercial eye care chain further eroded the economic outlook for the two solo practices.

THE NEED TO CHANGE IS ADDRESSED

Dr. Christianson and Dr. Swearingen began meeting in early 1996 to craft a plan that would allow their practices to remain healthy and still provide commitment to technology and quality of service. As 1996 progressed, the plan to consolidate the practices into a partnership and construct a new office building on Carlanna Lake Road took shape. The doctors signed the paperwork for their building loan on the day it was announced that Ketchikan Pulp Company was shutting down after 35 years as an anchor for Ketchikan’s economy.

On April 1, 1997, the building was complete, and the doctors moved in. This was the first day of operation of Ketchikan Eye Care Center as we now know it. The initial years were difficult as two separate staff combined into one and were forced to deal with two different personalities. All it took was a little time and commitment to change. As the years have passed, KECC has developed its own reputation for quality and service. Our central location is ideal for locals and people traveling on the ferry.

The commitment to keeping up with technology is evident from the vast array of eye care and office equipment currently at KECC.

Multi-doctor practices have their challenges, but one of the advantages is better economies of scale. These economies of scale allow for more efficient operations and the ability to financially keep up with the costs of new technology. We are also proud of the eye care products we provide. KECC offers eye care products and services of unmatched quality at a fair price. KECC is well situated to meet the current and future eye care needs of Southern Southeast Alaska.